In an official statement, the service admitted that they “made a misstep” with the tweet and that they “take full responsibility” for it.

“We would like the public to know that while we believe sex should be discussed maturely and openly, our treatment of it through this tweet was far from desirable,” the service said in an official statement posted on social media. “For this, we sincerely apologize.”

The apology came after one of their tweet last July 30 went viral for the wrong reasons. 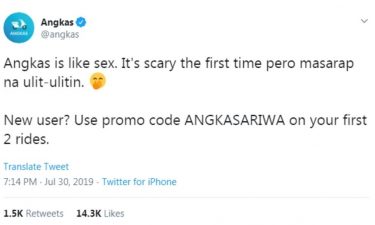 “Angkas is like sex. It’s scary the first time pero masarap na ulit-ulitin,” the now-deleted tweet read. Along with the statement was a promo code for new users of the service, ANGKASARIWA.

The Philippine National police immediately called out Angkas on Twitter and said that the remark is “not acceptable to commuters.”

Other netizens also expressed their dismay over what they called a “distasteful tweet.”

I follow Angkas #SocialMedia accounts for their witty #MomentMarketing strategies; however, I personally think they've gone a bit too far with this particular tweet… pic.twitter.com/VnVva75BxU

“I follow Angkas’ social media accounts for their witty, moment marketing strategies. However, I personally think they’ve gone too far with this particular tweet,” one tweet said.

Another netizen also pointed out the tweet’s adverse effect to the service’s bikers.

Kawawa rin yung Angkas bikers bec they are the frontliners. If Angkas thought the tweet was funny, they should have thought about what would customers feel if their bikers were to say that exact line. Would they like it if a biker said, "Maam, Angkas is like sex…" 🤷‍♀️

“Kawawa rin ‘yung Angkas bikers because they are the frontliners,” the tweet said. “If Angkas thought the tweet was funny, they should have thought about what would customers feel if their bikers were to say that exact line.”

Angkas, also in their official statement, apologized to their bikers for casting them “in an unfair light.”

“Our biker-partners have been trained to respect their riders and make them feel as comfortable as possible,” the statement said. “And no tweet can change that fact.”