The war is far from over.

Just when you thought Game of Thrones gave us one the biggest set pieces ever in the Battle of Winterfell, the latest episode “The Last of the Starks” deals some of the heaviest cards in the remaining war – the war for the Iron Throne. With the threat of the dead gone, all eyes now draw to King’s Landing for who will be sitting on the throne once the fighting is over.

But the fighting has barely begun, already people are feeling the tension of who will rule where, now that Jon and Daenerys know how their relationship posits a problem given both their heritages. As “The Last of the Starks” presents, the difficult path to the throne begins with the decisions one makes, and every move matters from now on.

The Last of the Starks Summary

The survivors of the Battle of Winterfell gather outside the castle to burn the fallen who have been laid outside on funeral pyres. Daenerys kisses and whispers final words to Jorah, while Sansa places a Stark pin on Theon. Jon gives the final rites for everyone in a manner akin to the Night’s Watch – the shields that guarded the realms of men, we shall never see their like again – praising their bravery and sacrifice. 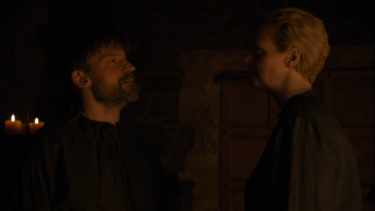 At the succeeding feast, Daenerys legitimizes Gendry as a Baratheon and makes him Lord of Storm’s End. Davos leads the applause as Sansa and Tyrion catch a glimpse of each other after Daenerys’ act. Jaime toasts with Brienne while Davos talks about Melisandre with Tyrion, who later chats with Bran. Tormund raises a toast for Daenerys, who in turn raises a toast for Arya as the real hero.

Tyrion plays his favorite drinking game with Jaime, Brienne, and Podrick, and is able to wring out of Brienne that she is still a virgin. Tormund praises Jon for all his heroic actions, making Daenerys uneasy thus exiting the hall; Tormund tries to follow Brienne but the Lannister brothers inadvertently block him. Sansa shares a moment with Sandor of how far she has come because she chose not go with him back in Season 2.

Gendry finally finds Arya, who has been avoiding the feast, and tells her about his new title. He also admits love for her, proposing to her to become his wife and Lady of Storm’s End. Arya kisses him, but turns down his proposal as she is “not a lady.” Jaime enters Brienne’s room, and after a brief moment of tension between them, they make love.

Daenerys meets with Jon in a failed attempt to make love as they know they are related by blood. They discuss how Jorah laid down his life for Daenerys because he loved her, and she regrets not loving him back like the way she does Jon. They come into a heated discussion of succession as Jon has the better claim even if Jon doesn’t want to rule. Daenerys asks to keep it a secret from anyone else, for everyone’s sakes. 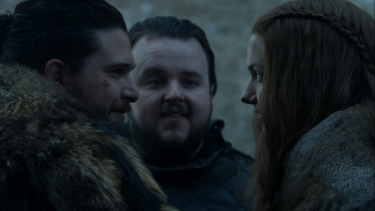 Half of the armies were killed in the Battle of Winterfell, which evens the fight against Cersei’s forces even with Yara reclaiming the Iron Islands and Dorne pledging their allegiance. Daenerys wishes to head down to King’s Landing immediately, but Sansa cautions the weariness of their forces. The remaining Starks talk in the godswood about Daenerys’ actions – and Bran tells the girls the truth about Jon.

Tyrion and Jaime are sharing a drink when Bronn comes in armed with the crossbow. Instead of killing them, he makes a deal that he will get a bigger castle should they win the war. Arya to shares a moment with Sandor, in agreement of going to King’s Landing and with someone to kill. Sansa and Tyrion have a discussion on the Winterfell wall about Daenerys and Jon – where Sansa tells him about there being “someone better” than Daenerys.

Before Jon and Davos set for the Kingsroad with the remaining army, he bids farewell to Tormund who is taking the wildlings back up North; Jon also asks him to take Ghost (who is wounded but survived the battle) back where he belongs. Sam and Gilly also give their farewell to Jon, but not before telling him the news that Gilly is pregnant with Sam’s child in hopes they will name it after Jon.

The lion and the krakken

On the ship to Dragonstone, Tyrion and Varys discuss Jon’s claim and how it posits a problem especially with Daenerys shifting from conqueror to tyrant, whereas Jon is loved by the people. As the dragons fly above the ships, Rhaegal is suddenly struck down to his death for Euron and his fleet have set an ambush for thm at Dragonstone. 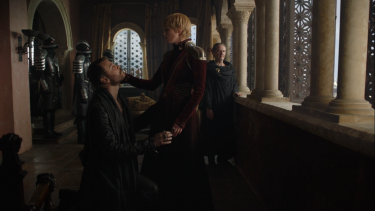 Daenerys thinks about attacking Euron’s fleet, but instead flies away in order not to risk Drogon’s life. Instead Euron fires on the Targaryen fleet, taking down nearly everyone. Tyrion jumps ship and makes it shore with Varys and Grey Worm; Missandei was taken prisoner. In King’s Landing, Cersei allows the commoners to enter as a trap for Daenerys; she also promises Euron that their child will one day rule.

Daenerys learns about Cersei’s actions in King’s Landing but still considers attacking the city. Varys cautions her not to act rashly as it will mean thousands of innocent lives lost, after all the goal is to “free the world of tyrants”. Tyrion suggests a bargain of lives, which Daenerys agrees to. Again Tyrion and Varys talk about who should be the true ruler of Westeros, Daenerys or Jon.

Outside King’s Landing, what remains from Daenerys’ fleet stands outside against the armed walls. Tyrion and Qyburn meet to discuss terms but failing to do so makes Tyrion walk up to the gates. Even with his life threatened, Tyrion pleads to Cersei to stand down for the sake of her unborn child. Indignant, Cersei has Missandei execute with her last word being “Dracarys”. Daenerys is distraught, and she turns away in silence.

The Last of the Starks Breakdown

“The Long Night” was all about the great battle and survival, “The Last of the Starks” brings the fight to the mind and self. It may subtle at the moment, but Daenerys is showing glimpses of the jealousy that drove his father and brother into madness. Varys is fully aware of this, and is more than willing to switch allegiance if it means the betterment of the realm. Tyrion however is not so easily swayed, as his faith in Daenerys remains strong – but at what cost though?

Sansa has ultimately proven in this episode that she is probably the smartest person in the show, smarter than Tyrion even. Not only are her moves logical, but they are better as it serves a purpose for everyone involved. Arya too clearly has unfinished business after killing the Night King, perhaps to finally finish her kill list once and for all (with the help of Sandor again). Cersei and Bronn are taking risks in their own ways, which may very well backfire on them.

Jon finds himself again at a crossroads. It is most likely true that he does not want to rule Westeros, but like becoming the commander of the Night’s Watch, it may be a position he has to take to save everyone. With Tyrion and Varys scheming for the betterment of the realm, Jon too has to decide if he will be a Stark or a Targaryen (but him parting with Ghost should be a sign of where he is heading). With two episodes remaining in Game of Thrones, one can only wonder who is left standing, and who will sit the Iron Throne.