A girl is bad-ass.

In the Season 7 finale of “Game of Thrones,” Sansa Stark tells Littlefinger just before he is executed, “I’m a slow learner, but I learn.” While it’s true that Sansa has had a long journey to arrive at the position she is in now, there is another Stark who learned just as well and used those learnings to great lengths in the most recent episode “The Long Night”—her sister Arya aka No One aka the most popular girl on Twitter right now.

After a long, dark, and gruelling battle, it was Arya who finally took down the Night King just before he was about to strike her brother Bran, who is the new all-seeing Three-Eyed Raven. In true assassin-like manner, she crept up on the Night King and with a quick sleight of hand she plunged a Valyrian steel knife into his chest. Arya has come a long way since we first saw her, and everything she learned, she applied in this episode, to fulfill a destiny.

After seeing the wights charging on their army, Arya gives Sansa a dragonglass knife and tells her to hide in the crypts. Sansa has never killed anyone or anything yet (Ramsay doesn’t count), so of course she is clueless on how to use it, to which Arya says “Stick them with the pointy end.” This is a callback to the series’ second-ever episode when Jon gifted Arya with her sword Needle. Back then Jon was castle-trained and Arya an amateur, and now its Arya who has fighting techniques telling another Stark how to survive.

When the wights reach the Winterfell walls, Arya is among those fighting above to clear them off. Here she uses the weapon she asked Gendry to make (you know, before they made out a few hours before the battle) with such great skill. There was a lot of questions to what kind of weapon she wanted, and it’s no surprise that it resembles the stick she used to train with back in Braavos against the waif. Only this time the tips have dragonglass, so she’s not just fighting annoying girls, she’s knocking down the undead. 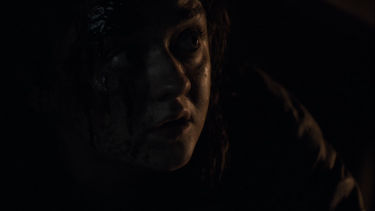 Outsmarting everyone with water dancer skills

As Arya retreats into Winterfell, she hides in the library trying to stay unnoticed from roaming wights. She barely makes a sound as she goes around the room, and this all stems from her training as a water dancer with Syrio Forel way back in Season 1. Syrio teaches Arya to be as “quick as a snake, quiet as shadow”, and it all pays off in her survival to get out of the reach of the wights – even at the expense of Beric Dondarrion. Syrio’s teachings are fulfilled when Melisandre echoes his words, “What do we say to the god of death?” You know the answer.

It is Melisandre who reminds Arya that there will be “eyes she will close forever”, including blue eyes aka White Walkers and by extension, the Night King himself. So Arya again uses her water dancer skills to sneak past the White Walker generals and spring on the Night King. Sure he catches her mid-air, but Arya pulls a clever manoeuvre that we have seen before; it is the same move she pulled on Brienne of Tarth during their awesome practice session in Season 7. Arya was able to outsmart the greatest fighter we’ve seen on the show, and she was also able to outsmart the big baddie (not you Cersei).

Indeed Arya has proven herself to be an excellent killer, with or without a mask on. While she still has two names remaining on her list – Cersei and the Mountain, both still alive and warm in King’s Landing – she has shown great skill on the battlefield. You can be sure there will be more people who will have a taste of Arya’s blades, and with three episodes remaining there’s no telling if she will make it out alive. All the same, a girl is bad-ass, it is known.