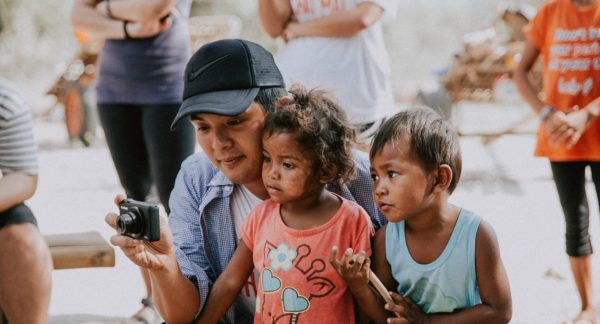 It all began, as most big journeys do, with a step outside the door, literally. Raf Dionisio, a 31-year-old social and environmental entrepreneur, went out on a trek to visit an indigenous tribe in Zambales to look for a tour with a cultural slant to offer the guests of The Circle Hostel Zambales and he met IPMR (Indigenous People’s Municipal Representative) Iking. IPMR Iking took Raf and a friend on a four-hour trek to Yangil and Banawen. Their hike took them through a breathtaking, but barren, landscape. And when Raf posted his photo of it on social media, his friends commented on “how poor the land was due to the lack of trees.” That’s when Raf realized that “the land was beautiful yet poor.” This thought followed him in the months after that led him on a journey with the Aetas of Zambales in restoring the wealth of their beautiful land.

Raf was inspired by the work of the Hineleban Foundation, led by John Perrine, in Bukidnon, where they had a reforestation program. Their model used coffee grown in the forests to help with the sustainability of the Foundation and the communities. Raf took this idea with him to Zambales, but instead of coffee as a means to sustain his social enterprises (the Circle Hostel and Make a Difference Travel) and the community, he thought of tourism. Raf asked John to help him with the reforestation program. Raf learned the basics of reforestation in January 2016, in April of the same year, 3 chieftains and 1 Aeta pastor traveled to Bukidnon with Kage Gozun and Jerms Choa-Peck (members of The Circle Hostel) to learn and to see for themselves that reforestation works.

This Big Idea grew even bigger when Raf realized that tourism alone wouldn’t help 100 Aeta families out of poverty, so he connected tourism with agriculture and forestry. The Tribes and Treks concept was launched on June 18, 2016 at Raf’s birthday party in the community. Raf had invited his friends for a day of singing, dancing, trekking, archery, planting trees, and, of course, a lot of good food prepared by the community. He wanted to show his friends his vision for Tribes and Treks and that became the benchmark for the tour program that runs today.

However, on one tour, Yangil Chieftain Erese Dela Cruz declined to accept cash payments for the community. Puzzled, Raf asked why, and the wise chief answered, “Tignan mo itong lupa naming. Napakalaki pero walang laman. Kung bigyan mo ako ng pera, baka magastos ko sa kape, sa load or sa sigarilyo. (Look at our land. It’s vast but empty. If I accept your money, I might just spend it on coffee, prepaid load, or cigarettes.)” Instead, the chief explained that what the community needed were seeds to plant on their land for food. Later that month, through the help of his grandmother, Raf was able to procure 100 kilos of purple yam seeds from The Good Shepherd Sisters in Baguio for the community. Today, the purple yam grown from those seeds are being sold as chips during tours.

When asked why he is doing this endeavor, Raf replied, “Because the Philippines, and the world, has a looming water issue — no forest will mean no access to water by many.”

Locally, the poverty of the Aetas bothered Raf and he wanted to help them. He also wants the rest of the Philippines to know that the indigenous people should be protected and empowered. “They are the hope for the environment — if we take care of them, they will take care of the forest,” he says. “And helping them is easy — just send them seeds of local fruits and vegetables. They are very sustainable and we could all learn from the principles of their lives.”

To learn more about Raf’s social and environmental enterprise,  log on to MadTravel.org.

The abridged version of this article appeared on the Manila Bulletin‘s April 8, 2018 edition.