What did come as a surprise was that legendary filmmaker Steven Spielberg signed on to direct. Spielberg, many of whose legend-making films came out in the ‘80s, already had a full slate of projects in his calendar, but the gravity of this project also proved too great to escape. Luckily for us, there are a lot of changes made to the book, both in content and (especially needed) tone, so that a poorly written novel with no drama and tepid language becomes, in Spielberg’s hands, an enjoyable popcorn movie that remains superficial, but the forgivable kind.

Taking place roughly 30 years in the future, the film is about a giant “Easter Egg” hunt in the virtual online world of the Oasis, the MMORPG of the future, so massive everyone effectively uses it, even if it’s not to compete or really “play.” Imagine a combination of a VR Second Life crossed with The Sims, where you can also go to different worlds and play competitive games if you wanted. Or just go sightseeing. Or some other form of recreation. The winner of the hunt will inherit a controlling share of the company that runs the Oasis, effectively becoming the majority shareholder of what is (in the future) the largest company on Earth, worth billions of dollars. Plucky independent gamers are going for it, but also corporate bad guys marshaling remarkable resources: research people, multiple players, data at their fingertips. 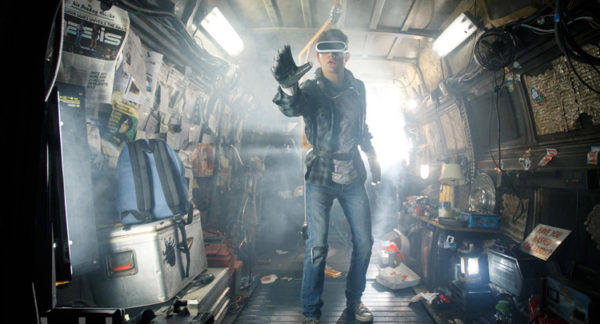 Main character Wade Watts (Tye Sheridan) is a bit of a cipher, and there’s not much character development to be had in this story where it’s intended for the audience to project themselves onto Wade, to an almost alarming degree. One of the failings of the film is too little work establishing and fleshing out Wade and his life, because there’s SO MUCH ELSE to get to: the world of the future, the Oasis, the challenge, the creator of the Oasis (played by Mark Rylance) whose history provides the clues to the challenges, the stakes, the other characters. Not to mention the hunt itself, which has three challenges for three keys.

The film streamlines many of the book’s meandering parts, collapsing the timeline and geography of the proceedings, combining some items, but also introducing a new character, a right-hand woman for main baddie Nolan Sorrento (Ben Mendelsohn) named F’Nale (Hannah John-Kamen, who gives off some Gazelle from Kingsman vibes). Sorrento’s own backstory is nicely tied up with Halliday, creator of the Oasis. The film also wisely changes pretty much all the challenges in the book save one, and we get more entertaining, more visual challenges, ones that tie in a little better to the themes of the book. Scenes mentioned in the book as data entries are given a more interesting life as digitally re-enacted tableaus that players can observe like in a museum, but with total control of the camera. The character of Art3mis (Olivia Cooke) gets fleshed out better here, with clearer, more emotional motivations (it helps in this regard to have a good actor bringing the character to life); she even gets a little more to do than her literary counterpart, in fact taking over actions Wade does in the book. There’s even an actual organized resistance in the movie. 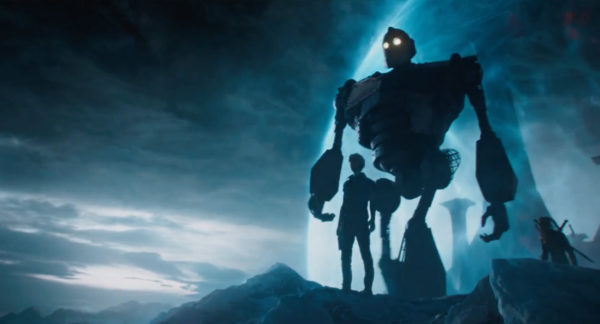 It’s an interesting question to ponder: how much of this can really be said to be directed by Spielberg, as so much of the film is computer-generated imagery? But it bears the pacing and the blocking of Spielberg, the mise-en-scene in the race sequence a particularly fun one to go through, designed to simulate for the audience what is essentially a theme park thrill-ride.

Rylance, enjoying his third collaboration with Spielberg in almost as many years, has fun with Halliday, a socially maladroit uber-nerd. Thirteen-year-old Philip Zhao steals most of his scenes as Sho, and Lena Waithe is a refreshing presence as Aech, Wade’s best (really only) friend. Sheridan has been great in other films but doesn’t get much to do since most of our real-time with him is watching his digital avatar. 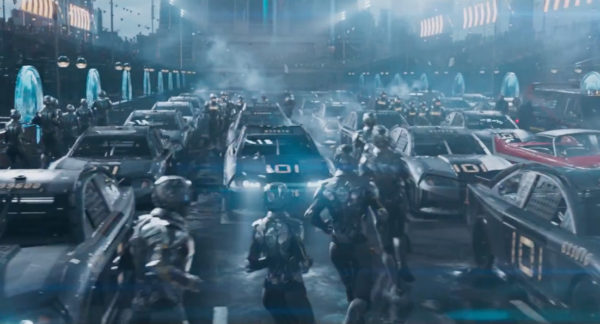 While the film is packed with references to worlds and characters and stories we love, these don’t really add anything in particular to the story actually being told. It’s a lot of pretty window-dressing, which helps to make up for the story being largely a prototypical adventure story with intrepid underdogs going up against corporate henchmen. That said, we are in the hands of a master filmmaker who can make thrilling chase scenes and action sequences, and while the carnage on the battlefields isn’t exactly as hard-hitting as the opening sequence of Saving Private Ryan, it’s still a joy to behold. Spielberg himself seems to be using the opportunity to indulge in a little fan service, specifically, his own, which comes across especially in the second challenge.

What is thankfully absent is a creepy self-congratulatory tone that pervaded the book. This has been smoothed out in the script, even if it does preserve some of the more cringe-worthy attempts at romance (still an improvement). Spielberg and company took the best elements and untapped potential of the book and delivered a pleasant, if not especially deep, rip-roaring yarn that echoes the very stories that inspired it.