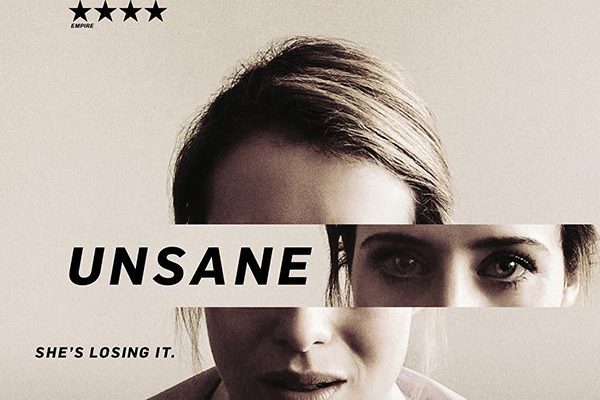 Since the “un-retirement” of filmmaker Steven Soderbergh from movie theaters, within 12 calendar months he’s been able to give audiences two feature films: last year’s delightful Logan Lucky, and now his slow-burn psychological horror Unsane. You have to appreciate that tireless work ethic.

Shot over roughly a week, mostly with an iPhone 7, Unsane stars Claire Foy as Sawyer Valentini, a young woman who’s transplanted herself to another city after a stalker terrorized her in her hometown. Traumatized by the incident, she catches what she thinks are fleeting glimpses of her stalker at her new workplace, or in the faces of people she meets at bars. Seeking help, she makes an appointment with a psychologist, who has her committed for a 24-hour period when she admits to having had the occasional suicidal thought. And so the nightmare begins, as Sawyer is held against her will, lashing out and defensive while trying to make sure it’s not all in her head.

In this way Unsane is a bargain; it’s actually two horror films for the price of one. The “is it all in her head?” side allows a claustrophobic, almost oppressive mood emerge, in keeping with Soderbergh’s fascination with process, allowing the style of his films to conform to the subject matter as appropriate. Somewhat underneath but running concurrently, the other horror film, one perhaps more frightening because of how plausible and likely it feels in today’s climate, is a tale of bureaucratic and corporate greed run amok. The idea of psychological clinics involuntarily committing patients with the slightest hint of suicidal ideation as an excuse to get at their insurance provider’s money is positively chilling. The scenes where Sawyer’s mother tries to get her out only to be blocked or patronized by figures of authority at every level are downright maddening and frustrating, adding to the helplessness felt in Sawyer’s plight.

Shooting with the iPhone is a challenge for Soderbergh, one that, like most challenges, he embraces. As his own cinematographer, he’s been shooting digital since Che, and this even more portable gadget allows him to adapt the shooting style to suit the tone, as in the title credits sequence when there is a voyeuristic/surveillance feel to the footage, as if someone were indeed stalking Sawyer. Once she is committed he gets to use very striking angles and shots, whether top or bottom shots, or ones where the lens is flush against a wall, making for extreme lines and angles, all to add to the claustrophobia and “otherness” of the spaces Sawyer finds herself confined in. There is no score as such, nothing like music, anyway, but more of sound design that heightens/reflects the mental state of Sawyer.

Foy delivers such a different energy from her most famous role as Queen Elizabeth in The Crown. It’s a remarkable feat and is a result perhaps of what Soderbergh wanted to get at with shooting the entire film in basically a week. With so little downtime because of the digital tools, the actors are acting most of the time and not waiting to act, which preserves a tension that Foy’s expressive eyes bring to bear. Continuing an almost tradition of casting comedians in non-funny roles, Jay Pharoah shows new sides to his range as fellow patient Nate, and the always-formidable Juno Temple gets to exercise yet another accent as Violet.

Unsane will not be for everyone. Soderbergh’s reliance on trying to use available light as much as possible isn’t to everyone’s taste, and with local theaters’ projection being what it is, will likely be too dark for people. But using the iPhone aesthetic does lend a level of realism to the proceedings, one that is supported by the lack of a “traditional” score. But the structure is still very much in the horror vein, the madness ramping up in the third act. Soderbergh continues to be one of the industry’s most interesting directors: never content, always seeking new challenges and processes.