Tomb Raider is not a great movie. The dialogue is fairly milquetoast when not downright clunky. There’s a distorted version of the tale of the Japanese ruler Himiko that begins the film, which gets retold redundantly about ten minutes later, as if we can’t be trusted to remember what happened that far back. Evil companies have embarrassingly obvious metaphor names. Characters quip one-liners they think are clever but aren’t.

What it is is a perfectly serviceable B-movie with a slightly bigger budget, making for pretty good action scenes and much better actors. As directed by Norwegian filmmaker Roar Uthaug (which is about as Norwegian a name as you can get), Tomb Raider makes a pretty great stab at delivering unto us Alicia Vikander: Action Badass. 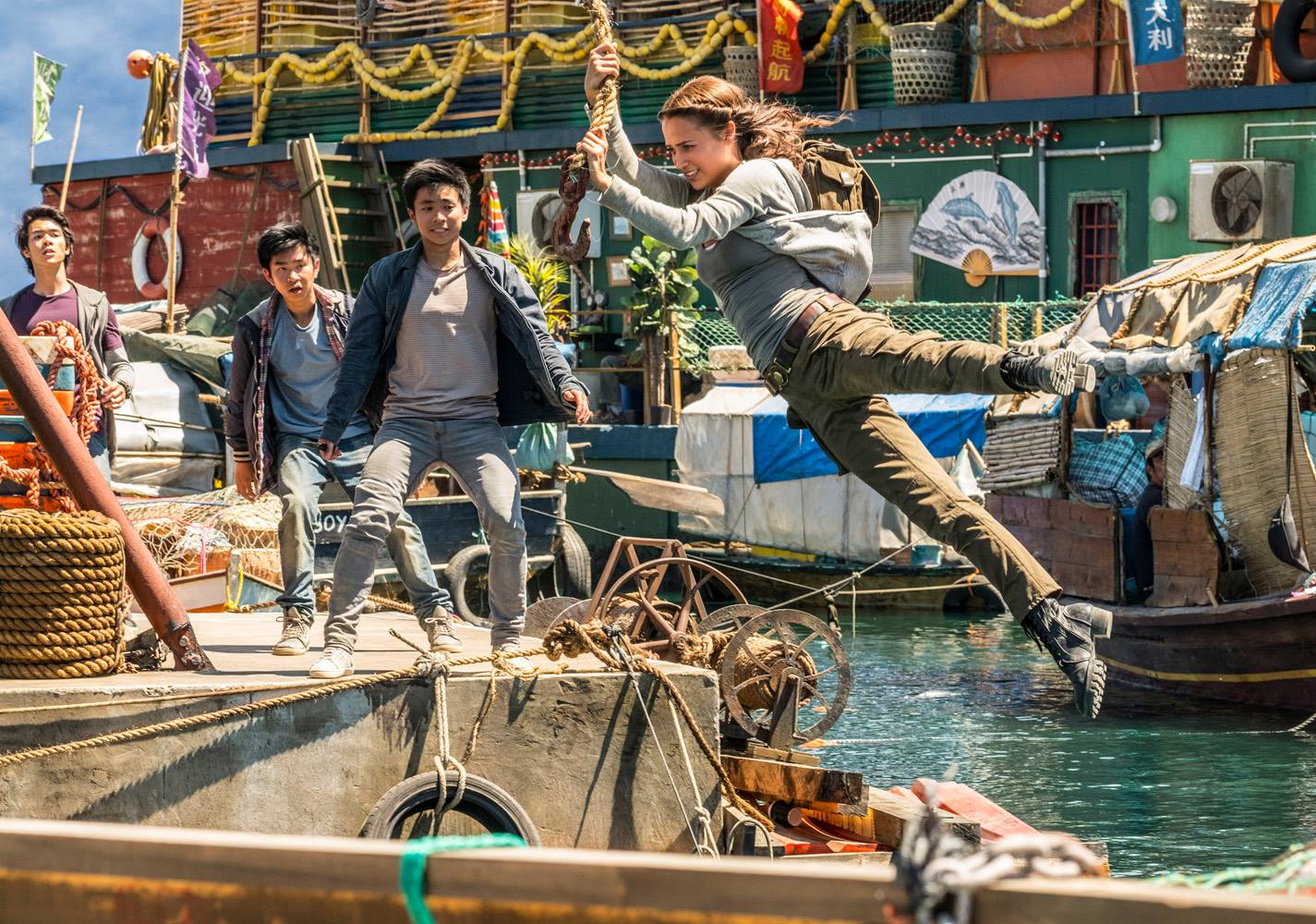 In the main, the movie is a pretty faithful adaptation of the 2013 video game that successfully rebooted the franchise, both critically and commercially. That game served as an origin story for the character, doing a Casino Royale for Lara Croft in not just rebooting her but starting from before she became the dual-pistol-wielding braided-ponytail raider of tombs Generation X grew up knowing and loving. If you’re not familiar, the basic gist is that Lara is a fiercely independent young woman still haunted by her father’s disappearance seven years ago, her father who’s a titan of industry but just so happens to also be a secret hobbyist explorer/archaeologist. She doesn’t want to declare him legally dead because issues, so she struggles to get by, eschewing her inheritance to prove a point to who knows. But then she gets a fancy Rubik’s cube for esoteric types from her father, finds his secret Batcave of archaeology into the supernatural, and away we go, with her figuring out where he may have disappeared to. 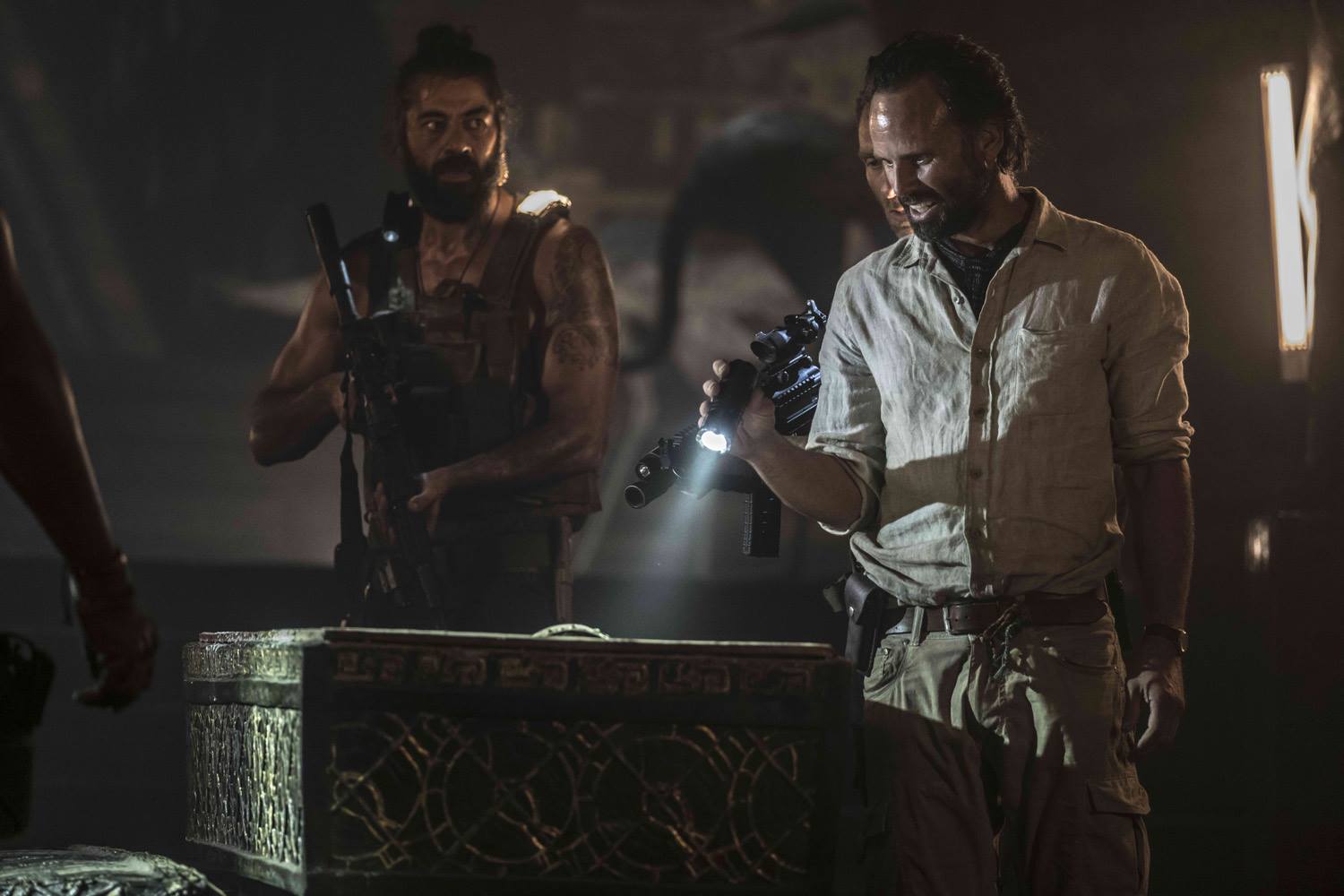 And that’s it! A more or less boilerplate plot, with bits and pieces lifted from King Kong, the Uncharted video games, and of course Indiana Jones, from which it cribs a specific plot point in Last Crusade. For some reason it’s also got two actors from AMC’s Into the Badlands: Daniel Wu and Nick Frost. Maybe it was cheaper for the two-fer? The script may have changed hands, because aside from the aforementioned Himiko tale that gets told twice in the span of twenty minutes, there are also two scenes that show what a scrappy, fiercely independent woman Lara is, and they appear back-to-back like they felt they didn’t make their point hard enough.

One of the things the film does well is show Lara’s vulnerability. She takes a lot of punishment in this film: flung by crashing waves, struck in the head by weapons, falling into a river, being hit by a car, getting choked out– the list goes on. As she is Academy Award Winner Alicia Vikander, Lara has some of the best moans, whimpers, and cries of pain you’ve ever heard in an action movie. The film also does a decent job of showing the immediate effects of all this carnage: flung through the forest, Lara has to pull out a piece of wood lodged in her side, screaming as she goes; later, she gets stitched up sans anesthesia. They also don’t pretend that the 5’5” Vikander has some kind of movie super-strength: when she has to go hand-to-hand she naturally goes to grappling manuevers. There’s also a nice beat where she takes stock after her first kill. 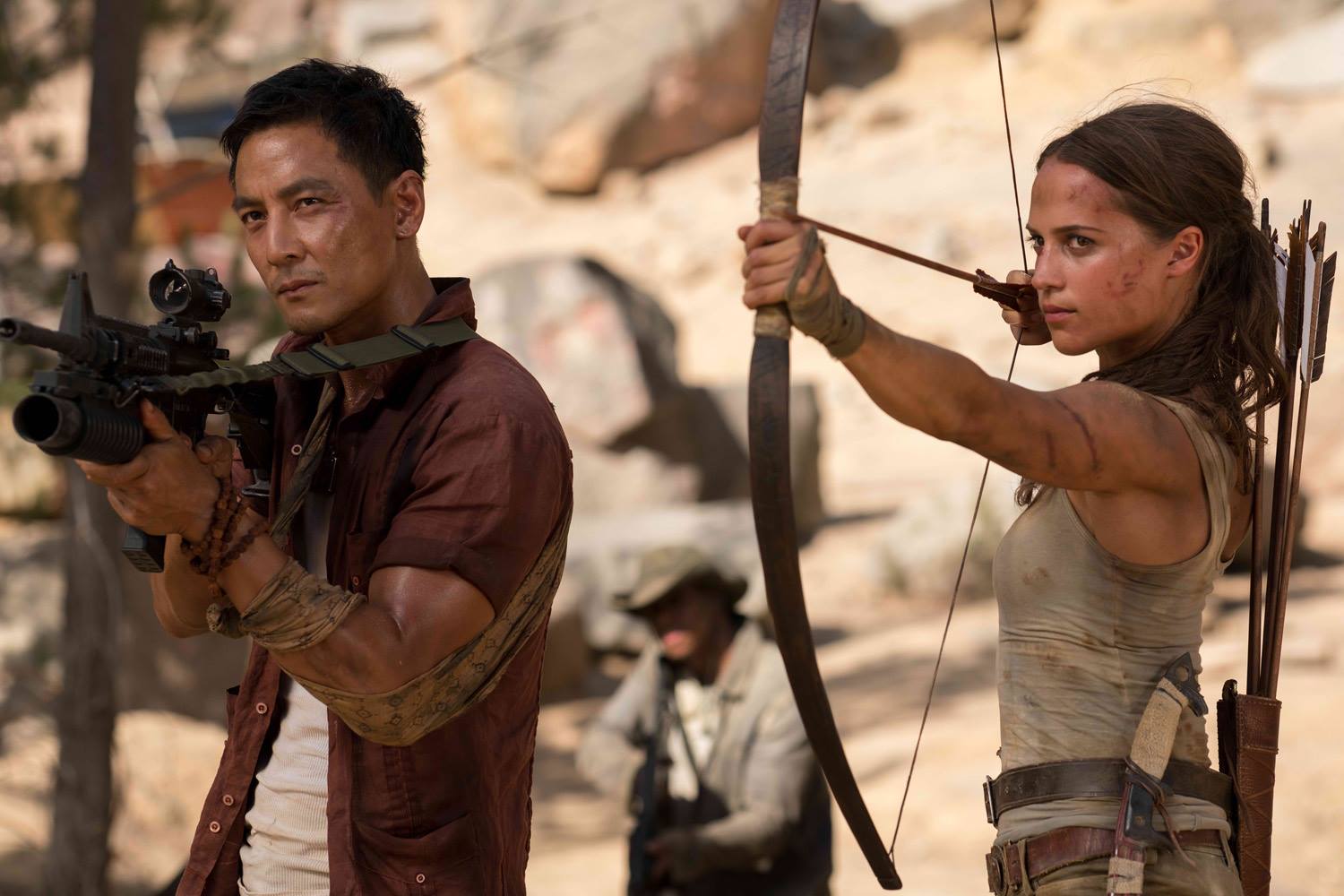 Vikander carries the movie entirely, as no other character really gets much in the way of characterization. Her charisma as a dramatic actress carries through to this more physical genre of running around with a bow and arrow, leaping crevasses with a pickaxe, and trying to keep from going over a waterfall by taking solace in the Most Perfectly Positioned Plane Crash on Earth. With supporting actors like Dominic West, the always-welcome Walton Goggins, and Kristin Scott Thomas, the cast elevates the script.

Uthaug’s action sequences are pretty interesting, as well. There’s a chase in London, in Hong Kong, and in the near-mythical island of Yamatai. All are shot differently. Most of the stunts and fights scenes favor practical effects (always a plus), so those blows land with feeling and mass. Sometimes physics gets bent a little, as when a character jumps on a ladder and the ladder doesn’t behave as it normally would, but those are few and far between.

It’s interesting to note that this might be the first film to avoid the Video Game Movie Curse. While it’s not going to be in the annals of Greatest Adventure Movies, Tomb Raider should satisfy both fans of the video game and people new to the character who are just seeking an enjoyable way to pass the time.